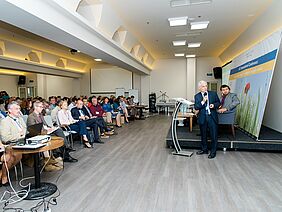 Transparency is crucial for the organic markets and exports from Ukraine. More transparency could be achieved through verifying good organic farming practices, shorter supply chains and traceability. This was one of the conclusions at the International Conference "Improving Integrity of Organic Supply Chains" in Odesa, Ukraine. The conference took place in the frame of the Swiss-Ukraine development cooperation project "Organic Market Development in Ukraine", which is funded by the Swiss State Secretariat for Economic Affairs (SECO). It attracted 170 participants from 14 countries.

(Frick, 6 October 2017) "Ukraine has the potential to be a main source of quality organic food and feed ingredients, both for its own as well as European and North-American markets. This is demonstrated through the presence of representatives of the European Commission, the United States Department of Agriculture (USDA), the Ukraine Ministry of Agriculture, the Ukraine State Service on Food Safety and Consumer Protection as well as national and international traders and certification bodies", said Beate Huber from FiBL, one of the Anti Fraud Initiative (AFI) initiators, at the conference in Odesa, Ukraine.

A burden for producers: divergent guidelines

The representatives of the European Commission, USDA and the Ukrainian government agreed to start communications, for example, on the registration of organic operators and control bodies in Ukraine. The special guidelines introduced by the European Commission for imports from Ukraine and Russia were an important topic at the conference. They have been assessed as being useful by the majority of the participants even though concerns were raised concerning the divergent implementation of the guidelines in different EU member states. Bo van Elzakker of Agro Eco and also one of the AFI initiators, underlined that "these additional guidelines, imposed on top of the general control measures, are a burden for serious organic producers, processors and businesses, and we wish that those supply chains are relieved from extra measures, once they have demonstrated consistent compliance."

A hot topic at the conference was sampling activities and residue analysis, which are causing high costs for the exporters and importers. It was concluded that it would be more efficient and effective if done in a risk-oriented manner, e.g., by taking samples during the season. "Knowing that it is possible to grow conventional products without residues in the final product might send a wrong signal to producers and exporters alike. It is better to focus on verifying good organic farming practices, shorter supply chains and traceability", said Jochen Neuendorff of the certifier GfRS and third AFI initiator.

The Odesa declaration adopted by the participants welcomed further AFI type workshops that address food and feed fraud and called on all stakeholders in the organic supply chains to support the effort to strengthen organic integrity.

The International Conference "Improving Integrity of Organic Supply Chains" held in Odesa, Ukraine, on 22./23.09.2017 attracted 170 participants representing the key stakeholders of the Ukraine organic arable crop supply chain, i.e. governments, competent authorities, control bodies, producers and buyers from 14 countries, including various EU countries, Switzerland and the US. It was organized by the Anti Fraud Initiative (AFI), i.e. the Research Institute of Organic Agriculture FiBL, Agro Eco and Gesellschaft für Ressourcenschutz GfRS, together with IFOAM - Organics International and EOCC, the platform of the European organic certifiers. The conference was implemented in the framework of two Swiss-Ukrainian projects: "Organic Market Development in Ukraine" (www.ukraine.fibl.org) and "Consolidation of the Local Organic Certification Bodies" funded by the Swiss Confederation through the State Secretariat for Economic Affairs (SECO).