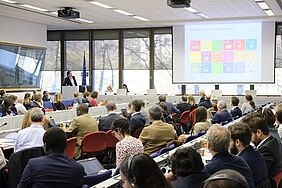 Christian Schader, lead of the Sustainability group at FiBL, presenting the link between organic agriculture and the SDGs. (Photo: FiBL, Dóra Mészáros) 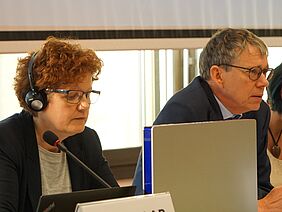 Comparative research shows that organic agriculture has great potential to improve economic, environmental and social conditions in rural areas in low-income countries. The time has come for international stakeholders and donors to take a stance on unlocking this potential and to support organic agriculture and other agro-ecological approaches worldwide as a means of achieving the United Nations' Sustainable Development Goals (SDGs). At a recent workshop held by the Research Institute of Organic Agriculture (FiBL), the benefits of organic agriculture in the light of the SDGs were explored.

(Brussels, 06 March 2019) On 26 February 2019, over 150 people came together in Brussels for the FiBL-led workshop "The Contribution of Organic Agriculture to the SDGs: Scientific evidence from comparative research". The aim of the event was to stimulate debate on the role of organic agriculture and other agro-ecological approaches in the European and international development policy frameworks in the context of the 2030 Agenda for Sustainable Development.

FiBL researchers presented the results of their research on the performance of organic agriculture in tropical and sub-tropical climate zones in terms of productivity, economic viability, environmental soundness and social inclusiveness to an audience, which included participants from the European Commission, Members of the European Parliament, diplomats, academics, practitioners as well as civil society organisations.

FiBL research results show that organic farming and other agro-ecological methods can be more economically beneficial for smallholder families in low-income countries than conventional methods, despite lower yields in some cases, as they require less capital and income can be higher in terms of labour input. Hence, organic farming can represent an economic advantage for smallholders in addition to the well-known environmental benefits that this agricultural system brings. The yield potential in these regions is far from exhausted, as there is still too little knowledge on how to implement the concepts of organic farming and other agro-ecological approaches in a meaningful way.

Beate Huber, Head of the Department of International Cooperation at FiBL Switzerland, said, "organic agriculture has great potential to contribute to sustainable development. Investment in research and capacity building will help to take advantage of its benefits and to tackle existing challenges in technologies and market access and to better understand the drivers of change."

Political action needs to be taken

Willem Olthof from the European Commission Directorate-General for International Cooperation and Development stated, "there is quite an evidence base, but at the same time this evidence base is geared towards the north and insufficiently towards the south, and what is important is an understanding of the drivers of change. This is something which we can debate further; those drivers tell us more about where we can intervene and where we can intervene efficiently. I am particularly intrigued by the potential influence of innovations in organic agriculture on conventional agriculture and would welcome more research on that".

Maria Heubuch concluded, "now that we've seen the evidence, political action needs to be taken. In the next programming period of the European Union’s development cooperation, considerably more money has to be spent on organic and agro-ecological farming. Without the appropriate amount of funding, we will fail to transform agriculture and deliver on the Agenda 2030."

Overall, the event was an outstanding opportunity to demonstrate the contribution of organic agriculture to the European and international policy debate on sustainable development, to showcase FiBL’s ongoing work, and highlight the importance of continued and increased investment in research.