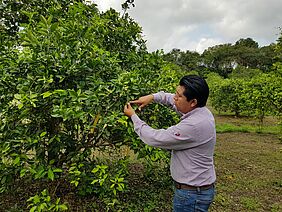 In a plantation in Veracruz, Mexico, an employee inspects the trees to see whether they have been infested with the Asian citrus psyllid. (Photo: FiBL, Salvador Garibay) 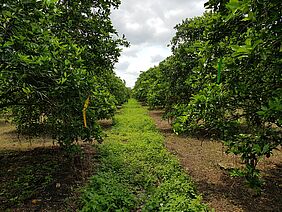 The flora between the tree rows provides a habitat for beneficial insects. (Photo: FiBL, Salvador Garibay)

Worldwide, orange production is threatened by a bacterium that causes the plant disease Huanglongbing (HLB), also known as "yellow dragon disease" or "citrus greening disease". The leaves of infested trees turn a greenish yellow, fruits remain small, green, deformed and bitter, and the trees eventually die. The Research Institute of Organic Agriculture (FiBL) is working successfully with Mexican producers and the support of Coop to develop countermeasures.

(Frick, 10.12.2019) The bacterium Candidatus Liberibacter spp., which is usually fatal for orange trees, can be transmitted by the Asian citrus psyllid (Diaphorina citri) if it is carrying the bacterium and feeding on the sap of the trees. The bacteria then enter the transport tissue of the plants, multiplying and clogging them. This leads to high yield losses in the orange harvest and the trees die after a few years. In order to prevent this disease, the spread of the four-millimetre-long leaf-sucking insect needs to be targeted, for example by promoting biodiversity. Field trials conducted over several years under the direction of FiBL at various locations in Mexico have shown that organic farming results in far fewer Asian citrus psyllids than conventional farming.

In an organically managed orange plantation, in a case of a serious infestation, the research team counted an average of 574 psyllids per year and hectare, compared to 4232 in a conventional plantation. "The result clearly shows what can only be achieved by avoiding herbicides and insecticides in organic farming," says FiBL project manager Salvador Garibay. "The species-rich flora between the tree rows provides a habitat for beneficial insects due to diverse structures. They keep the citrus psyllids in check."

As a result of this observation, the practitioners have begun to alternately mow the tramlines between the rows of trees rather than completely, so that the beneficial insects can survive permanently in the plantation. The citrus psyllids should also be controlled with biological pest control in phases of strong propagation: The researchers are investigating, among other things, the use of a fungus and the green lacewing (Chrysopidae), both of which can decimate the psyllids. In addition, they are testing plant charcoal (Biochar), fertilizer and plant strengthening agents to support the trees' natural resistance to insects and bacteria.

Research is being carried out worldwide at full speed to combat the plant disease HLB, not least because it threatens citrus production and processing in various regions of the world and thus an entire industrial sector. The Coop Sustainability Fund has been supporting a FiBL project to develop practical solutions for the biological management of the HLB disease since 2011, until at least 2020. In addition, the exchange between organic citrus producers as well as the cooperation with local research and advisory centres will be strengthened under the coordination of FiBL.

Salvador Garibay further explains, "The results of this project could also be useful for orange production in Europe." HLB has not yet been detected, but the citrus psyllid has already been spotted.

Partners on the way to more organic

For over 25 years, Coop has continuously promoted the further development of organic farming in close cooperation with the Research Institute of Organic Agriculture (FiBL). With the Coop Sustainability Fund, the retailer has further strengthened this commitment since 2003.