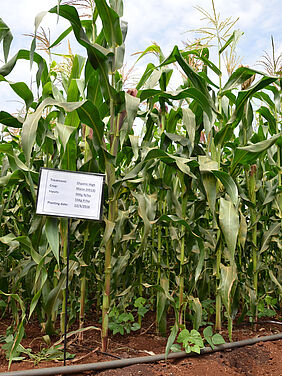 One of the sixteen trial plots in Chuka. (Photo: FiBL, Franziska Hämmerli) 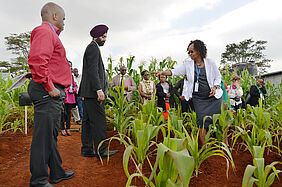 A long-term study in Kenya shows that maize yields and nutrient uptake in the organic farming systems are quite similar to conventional systems. Due to premium prices, organic systems are more profitable for farmers than conventional ones. The study was carried out by the Research Institute of Organic Agriculture (FiBL) in close cooperation with partners in Kenya.

(Frick, 24 November 2016) A recent publication in the journal "Agriculture Ecosystems and Environment" shows the results of maize-based conventional and organic farming systems over the first six years of two long-term field trials in Chuka and Thika in the central highlands of Kenya. Both farming systems were compared at input levels of commercial, export-oriented production (high) and at those of smallholder farmers (low). At each level, the farming systems were fertilized with the same amount of nitrogen and phosphorus, the conventional one with farmyard manure and mineral fertilizer, the organic one with compost, ash and rock phosphate. The researchers from FiBL and its Kenyan partners show that after a three-year conversion phase, crop yields from high-input organic systems were similar to those of high-input conventional systems in Chuka and Thika. Despite higher production costs, the profitability of organic farming reached 1.3 to 4.1 times the profitability of conventional systems after the fifth year of conversion to organic due to premium prices. In the low-input systems at Thika, sole maize cropping produced three times higher maize yield in conventional compared to organic, but, when intercropped with beans, the maize yields were similar.

The study also revealed that nutrient balances on both sites were negative in the low-input systems as well as in the conventional high-input system. So these systems are mining for soil nutrients. The positive balance found in the organic high-input system was due to the common practice of leaving crop residues in the field. Therefore, the study suggests revisiting the fertilizer recommendations for small-scale farmers to secure yields and for export-oriented farmers to improve management practices to conserve resources. The findings demonstrate that high-input organic farming is productive, economically viable, resource-conserving and can contribute to sustainable agricultural production in Kenya and the regions in sub-Saharan Africa that have environmental conditions similar to Chuka and Thika.

The FiBL long-term study in the tropics: SysCom

The study is part of the long-term Farming Systems Comparison (SysCom) programme (www.systems-comparison.fibl.org). The SysCom programme compares agricultural production systems (primarily organic and conventional) in three tropical countries (Kenya, India and Bolivia) in order to increase knowledge about the potentials and limitations of organic farming.

The long-term study SysCom is financially supported by Biovision Foundation, the Swiss Agency for Development and Cooperation, the Liechtenstein Development Service and the Coop Sustainability Fund.