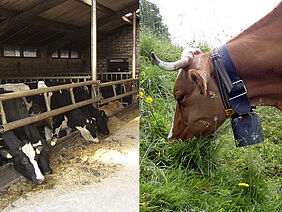 (left) Worldwide, 25% of arable land is used for animal fodder. This could, however, be used more efficiently for human consumption. (right) Grassland which cannot be used as arable land is ideal fodder for ruminants. Photo: Thomas Alföldi, FiBL (r.)/PETA (l.)

According to a new study led by the Research Institute of Organic Agriculture FiBL on behalf of the Food and Agriculture Organization FAO, reducing the proportion of animal feed grown on crop land would have a positive effect on the availability of food and important environmental indicators such as GHG emissions and nitrogen surplus. Less competition between production of food and animal feed proves to be an effective approach to sustainably providing food for the estimated 10 billion people in 2050. The results of the study have recently been published in the scientific journal of the Royal Society Interface.

(Frick, 16.12.2015) A new study led by the Research Institute of Organic Agriculture, which was published in the scientific journal of the Royal Society Interface, shows that reducing concentrate feed can be a feasible alternative for ensuring food security in a climate-friendly way.

Calculations using a model show that, should the predictions of the FAO become a reality, agriculture’s negative impact on the environment will increase significantly by 2050. One of the main reasons is the intensive feeding of livestock of crops like wheat, maize and soy. In order to intensify production, already diminishing cropland is increasingly used for feed production instead of the production of plant-based food. Thus, concentrate feed for animals competes with food for human consumption.
The study shows that by reducing the production of concentrate feed, more plant-based food can be produced while also protecting the environment and reducing GHG emissions. Calculations show that the number of animal products in human diets would decrease by 53% if feed production on cropland were to be reduced. This would mostly concern pork, poultry and eggs.

The connection between meat consumption and environmental damage of agriculture has long been a controversial topic. A common conclusion is to further intensify animal husbandry, i.e. to produce more high-energy concentrate feed on arable land. It is often regarded as the only way to meet the increasing demand for animal-based food and to reduce GHG per kg meat. However, the new FiBL study also shows that reducing concentrate feed would be a more sustainable solution for supplying the global population with food. According to the calculations, this strategy has great potential and ideally complements already existing approaches for food security like improving the efficiency of food production, distribution and use as well as decreasing consumption.

Newly developed model can be used for a variety of purposes

Researchers at FiBL, the FAO, the “Alpen-Adria” University in Vienna and the University of Aberdeen designed a global model system in order to calculate various scenarios of food availability and impacts of food production on the environment. This model system is able to calculate the complex material flows and resulting production volumes and environmental impacts of our food system. This allows for an in-depth analysis of changes in production methods and food consumption. The system is consistent with global statistics of the FAO and can be used in the future to answer various questions on the sustainability of agricultural and food systems.