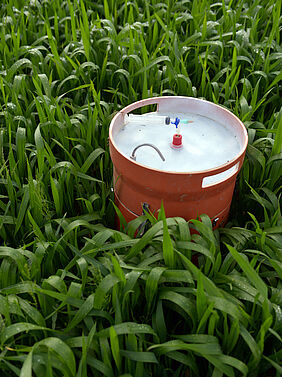 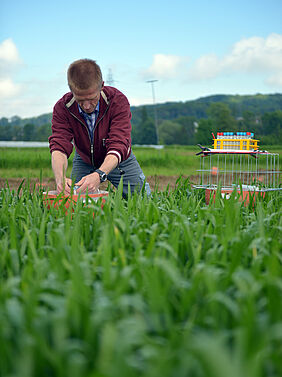 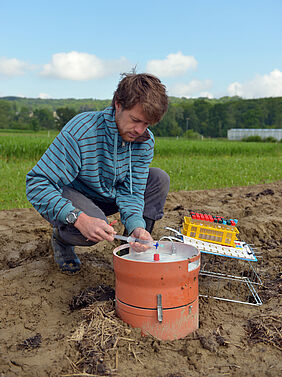 Measurment of greenhouse gas emissions in a ploughed field in the comparatory DOK-trial. (Foto: Mercator Foundation)

Organically farmed lands emit less nitrous oxide and take up greater amounts of atmospheric methane, thus contributing to climate change mitigation. This is the result of an evaluation of 19 comparative studies from around the globe conducted by a team of experts at the Research Institute of Organic Agriculture (Forschungsinstitut für biologischen Landbau, FiBL) and the University of Hohenheim. The results of this meta-analysis have now been published in the online version of the Science of the Total Environment journal.

The study’s lead investigator Andreas Gattinger at FiBL considers the study’s findings a positive contribution to the further development of organic farming. «The fact that organically managed soils emit lower quantities of nitrous oxide appears to be primarily due to soil quality. In contrast, nitrous oxide emissions on non-organic lands appear to be primarily linked to the quantities of nitrogen fertilizers applied», says Gattinger. The team of authors does however emphasize that additional research is needed, especially in an international context, in order to substantiate the findings of the present study. No such comparative studies on GHG emissions have as yet been conducted in southern hemisphere regions.

Such studies are needed to optimize agricultural management systems in terms of their greenhouse gas emissions and to transfer results to different soils, regions and cropping systems.
The study was conducted as part of the Carbon Credits for Sustainable Land Use Systems (CaLas) project with support from the Mercator Foundation Switzerland.

Skinner, C, A. Gattinger, A. Mueller, P. Mäder, A. Fliessbach, R. Ruser, and U. Niggli 2014. Greenhouse gas fluxes from agricultural soils under organic and non-organic management – a global meta-analysis. Science of the Total Environment, 468-469, 553-563.
A copy of the study may be obtained from Andreas Gattinger on request.