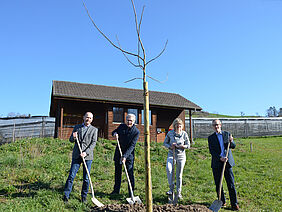 The Research Institute of Organic Agriculture (FiBL) is entering a new phase: Knut Schmidtke, Marc Schärer and Lucius Tamm jointly took over the management of FiBL Switzerland on 1 April 2020.

(Frick, 2 April 2020) FiBL Switzerland is meeting the challenges of research and extension for organic agriculture with a new and bigger directorate. Since 1 April 2020, Knut Schmidtke, Marc Schärer and Lucius Tamm have formed a diverse and competent team as the new directors of FiBL Switzerland.

FiBL’s core competencies and key tasks are quality research and knowledge transfer for organic and sustainable agriculture. The new directors focus FiBL's work on key challenges of the future in order to

Knut Schmidtke has been Prorector for Research and Development at the Dresden University of Applied Sciences (HTW) since 2015. He holds a doctorate in agronomy and initially worked at the Universities of Giessen and Göttingen. After visiting professorships in Vienna and Sapporo, Japan, he worked at HTW as a Professor of Organic Agriculture. The 57-year-old was elected as the Director of Research, Extension & Innovation by the FiBL Foundation Council on the recommendation of the recruiting committee in a broad-based process. He will also take over as Chairman of the Executive Board of FiBL Switzerland.

Marc Schärer joined FiBL in August 2017 as Head of Finance and Accounting. The 38-year-old business economist with a Master of Advanced Studies (MAS) in Risk Management first worked in auditing and then in a leading position in the controlling department of a public administration for several years. Marc Schärer was appointed Director of Finance & Administration by the FiBL Foundation Council.

Lucius Tamm has been a researcher at FiBL in a management position since 1994 and joined the Executive Board in 1999. The 57-year-old is the Head of the Department of Crop Sciences and has served as Deputy Director since 2017. He was appointed Director of Cooperation by the FiBL Foundation Council and is thus responsible for expanding the closely-knit national and international networks of FiBL Switzerland. At the same time, he will continue to be the Head the Department of Crop Sciences.

Beate Huber has been at FiBL since 2002. She became part of the Executive Board as the Head of the Department of International Cooperation in 2009, and she had been Deputy Director since 2017. She will support the directors in matters of corporate culture.

The new team of directors took over the management of FiBL Switzerland from Urs Niggli on 1 April 2020. Under his leadership, since 1990, FiBL has become one of the world's leading research institutes, with a total of 280 employees at locations in Switzerland, Germany, Austria, France and Brussels. As president of FiBL Europe, FiBL Germany and FiBL Austria, he will continue to actively support FiBL.