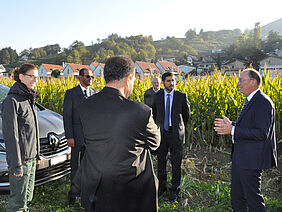 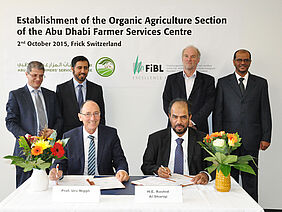 Over the next four years, experts in organic agriculture will visit the UAE in order to establish a centre for organic agriculture in cooperation with local institutions, researchers and farmers. Urs Niggli, Director of the Research Institute of Organic Agriculture (FiBL), and Rashed Mohamed Al Shariqi, Chairman of the Abu Dhabi Farmers’ Services Centre (ADFSC), signed the corresponding four-year contract.

(Frick, 06.11.2015) Farmers in Abu Dhabi wish to increase their food sovereignty. Since organic food production is an essential component of agricultural self-sufficiency, an international competition was held and the project dossier turned in by FiBL won. Representatives from both organizations signed the four-year contract on 2 October.

Over the next four years, experts from FiBL will develop the "Abu Dhabi Organic Section" - a separate department within the Abu Dhabi Farmers’ Services Centre (ADFSC). Together, they will work to develop four major areas, which local experts will lead independently after completion of the contract.

Need for funding of organic agriculture in the United Arab Emirates

A body for organic certification and legally established guidelines already exist in the Emirates. According to the statistical reference work "The World of Organic Agriculture" of 2015, 50 organic farms are already registered. In total, these farms cultivate approximately 4,000 hectares, or less than one percent of the Gulf State’s entire agricultural area.  FiBL aims to engage at least 100 more farm owners to begin the conversion towards organic farming. Rashed Mohamed Al Shariqi, Chairman of the Abu Dhabi Farmers’ Services Centre (ADFSC), believes that this number will be considerably higher: "Our farmers battle with sandy and barren soil. They are aware of the potential of organic agriculture because it focusses on the development of sustainable and fertile soil. Moreover, the farmers are interested in producing healthy food for their families and communities."

Both parties are confident that these goals will be achieved due to FiBL’s experience in organic agriculture in arid and semi-arid climate zones and its track-record in successfully developing projects to support organic farming in countries at similar latitudes such as Tunisia, India and Lebanon.