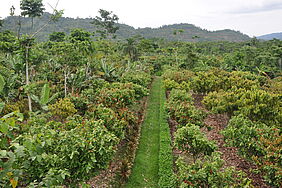 The long-term trial in Bolivia: Agroforestry on the left, monoculture on the right. You will find the corresponding movie in the link section of this media release. (Photo: FiBL, Ivan Chita) 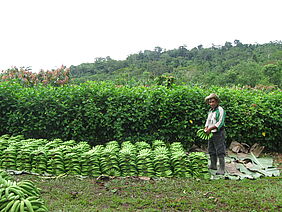 The income per working day is roughly twice as high in the agroforestry systems compared to the monocultures – thanks to by-crops like bananas. (Photo: FiBL, Monika Schneider) 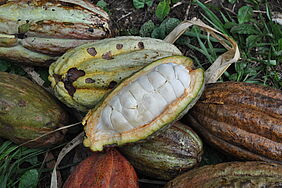 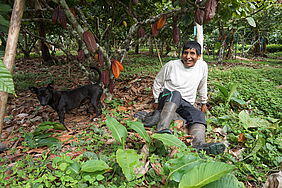 Working hours in organic management are similar to conventional management. Thus, organic farmers like Eduardo, a SysCom-worker with his dog Musculito, enjoy a well-earned rest amongst the cocoa trees. (Photo: FiBL, Lisa Mader)

A long-term study in Bolivia comparing different cacao production systems shows that in addition to enhancing biodiversity as well as farmers’ food security and nutrition, agroforestry systems and organic management may also be more profitable than full-sun monocultures and conventional management in young cacao plantations. The study was carried out by the Research Institute of Organic Agriculture (FiBL) in cooperation with partners in Bolivia.

(Frick, 23 February 2017) The demand for cacao has increased worldwide. To meet the demand, the organic cultivated area has been expanded almost six-fold since 2004, and thus considerably more than the total cocoa area.  Currently, more than 300’000 hectares of organic cacao are grown worldwide, over 60 percent in Latin America. The total cultivated area has grown by about 20 %, reaching up to 10 million hectares today. In the process, traditional agroforestry systems have been replaced by monocultures. It is well known that this leads to a drastic loss of biodiversity. "However, little is known about the economic differences between the different production systems", Laura Armengot, co-author of the long-term study, states. "Our recent publication now sheds light on this issue."

The study assessed the productivity and return on labour, that is, the income per working day, of four different cacao production systems in a long-term trial in Bolivia during the first five years after the establishment. Full-sun monocultures, where only cacao trees are grown, and agroforestry systems, where cacao trees are intercropped with shade trees and other by-crops such as bananas or plantains, were compared under both organic and conventional management.

The return on labour across the years was roughly twice as high in the agroforestry systems compared to the monocultures, even though agroforestry systems were more labour-intensive than monocultures due to the time required to manage the shade trees and even though the yields of cacao were about 40 % higher in the monocultures. This is due to the revenues derived from the sales of banana and plantains which economically compensate the lower cacao yields. This is important because farmers’ adoption of more sustainable production systems such as agroforestry and organic farming will largely depend on their economic feasibility. Thus, efforts for developing markets and making them accessible to the farmers to sell by-crops such as bananas or plantains is crucial to ensure the profitability of the agroforestry systems. In addition, agroforestry systems contribute to food security and nutrition of small-scale farmers due to self-consumption of by-crops such as oranges, peach palm, bananas or avocados. It is important to further monitor the different production systems until the cacao trees reach at least full production in order to better understand how the systems develop in the long term.

Comparing organic and conventional management, cacao yields and return on labour were similar under both management types in the agroforestry systems, but in the monocultures, cacao yields were nearly 50 % lower under organic farming. However, the return on labour was similar for both systems. This was mainly due to the lower cost for inputs under the organic management. This might have a strong implication for smallholder farmers, who usually have limited savings and lack access to credit.
In addition, organic management was not more labour intensive than conventional management.

All FiBL long-term studies in the tropics: SysCom

The study is part of the long-term Farming Systems Comparison (SysCom) programme (www.systems-comparison.fibl.org). The SysCom programme compares agricultural production systems (primarily organic and conventional) in three tropical countries (Kenya, India and Bolivia) in order to increase knowledge about the potentials and limitations of organic farming.