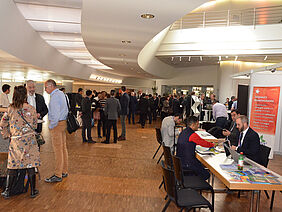 Around 1050 delegates and over 500 companies from 52 countries attended the conference. (Photo: FiBL, Andreas Basler) 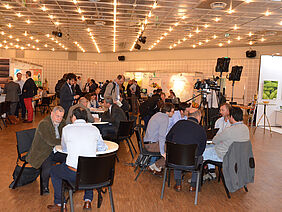 The participants of ABIM were able to exchange innovations during presentations, at various booths and in one-to-one talks. (Photo: FiBL, Andreas Basler)

Producers of biocontrol products did not always have a common meeting place. This changed in 2006, when the innovative idea to hold a congress for biocontrol products was realised. The vision of strengthening a fragmented sector consisting of small and medium-sized enterprises with limited resources became a success story: With over 1000 delegates and 500 companies from 52 countries, the conference celebrated a record number of visitors from 23 to 25 October in Basel. Since its inception, FiBL has been one of the co-organisers of the conference, together with the International Biocontrol Manufacturers Association IBMA.

(Frick, 31 October 2017) The Annual Biocontrol Industry Meeting (ABIM) in Basel is the largest international event for biocontrol products. This year, around 1050 delegates and over 500 companies from 52 countries as well as representatives of the EU, OECD and FAO attended the conference from 23 to 25 October, which resulted in yet another visitor record since the conference has been founded twelve years ago. It also reflects the aspirational mind-set and the continuous growth of the industry in biological plant protection.

In his opening speech, Dr Lucius Tamm of the Research Institute of Organic Agriculture FiBL pointed out the enormous growth of organic agriculture worldwide: While in 1999 only 11 million hectares were managed organically, the total in 2015 amounted to over 50 million hectares, which corresponds to a fivefold increase of organic area in only 16 years. "Organic farming shows the strongest growth in agriculture", Tamm states. Also in conventional agriculture, biocontrol solutions are increasingly used.
The participants of ABIM were able to exchange innovations and help create the future direction of the sector during presentations, at various booths and in one-to-one talks.

The main benefit was derived by small and medium-sized enterprises of the sector, which used the event as a product market place, since it is a meeting place of international suppliers and customers. Especially for small companies, it is important to create an international network and collaborate with others. Kartik Laijawala of the small Indian biocontrol enterprise Nico Orgo from Mumbai confirms this. "The meeting is important for international networking", he states as the employee of a company specialising in products containing the natural agent neem. "We are looking for European business partners."

The family business ActionPin from the southwest of France sees the conference as a globally unique platform to have discussions and exchange ideas with people from the industry. The company has been working since 1948 with a natural agent terpene from pine trees, a "waste product" resulting from regional wood and paper processing. According to the manufacturer, terpene naturally increases the efficacy of biocontrol products and fertilisers in organic farming. These two small and medium-sized enterprises are examples of 69 exhibitors from all over the world.

Over the last years, multinational corporations have joined the biocontrol market. Having large manufacturers of chemically synthesized pesticides interested in biological plant protection had a positive influence on the industry, due to their additional assets and vast knowledge.

FiBL is a founding member and part of the organisational committee

ABIM was formed from a project between FiBL and the International Biocontrol Manufacturers' Association (IBMA), which also holds its annual general assembly at the conference in Basel. Both parties have organised the event since its inception. Thus, they determine the direction of ABIM and influence the way organic plant protection is developed in the long term. This is important for organic farmers, who embrace the continuous innovation of biological plant protection and who have always quickly implemented innovative solutions into practice for the good of the environment and the people.