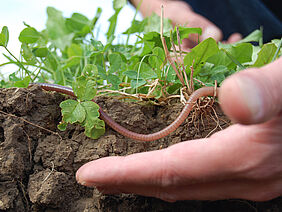 All human and animal life depends upon the uppermost humus layer of the living soil. (Photo: Thomas Alföldi, FiBL)

“Organic agriculture provides environmental benefits through the sequestration of atmospheric carbon in soil organic matter”, says a group of international experts headed by scientists from the Research Institute of Organic Agriculture (FiBL), Switzerland. In a new study published in the Proceedings of the National Academy of Sciences (PNAS) they analysed data from 74 field comparison studies that measured the soil organic carbon (humus) levels in different soils under organic and conventional farming systems throughout the world. Of those, about 20 delivered results that enabled comparisons of carbon sequestration rates among farming systems.

(Frick, October 16, 2012) The general results of the study indicated that soil organic carbon stocks were 3.5 metric tons per hectare higher in organic than in non-organic farming systems and that organic farming systems sequestered up to 450 kg more atmospheric carbon per hectare and year through CO2 bound into soil organic matter. Significant differences were also found in soil carbon levels between the farming systems for the comparisons that are based on organic systems without off-farm manure input. “The results over a long period of 14 years on average were consistent and significant. Our findings show that organically managed soils accumulate soil organic matter, and by this bind carbon dioxide from the atmosphere,” says Andreas Gattinger of FiBL. However, the researchers noted that there are some differences in the way that organic farming systems are managed and some do not sequester atmospheric carbon at all. The observed differences in soil carbon levels under organic and non-organic farming seemed to be mainly influenced by practices typical of mixed farming, i.e. livestock plus crop production, which are characterized by organic matter recycling via manure and forage legumes in the crop rotation. Soil carbon levels under modern agricultural practices are likely to be improved if measures intrinsic to organic farming are applied to any agricultural production system.

Carbon dioxide is a greenhouse gas, and increasing levels in the atmosphere are responsible for climate change. Organic agriculture has the potential to contribute to mitigating the adverse impacts of climate change by sequestering atmospheric carbon in the soil. Organic agriculture can thus play an important role for “climate friendly” agriculture. However, the researchers caution that carbon sequestration in agriculture is only a part of global mitigation efforts, and that substantial emissions reductions of carbon dioxide and other greenhouse gases in all sectors are indispensable to tackle the problem of climate change. In addition, more research is still needed to optimize the ability of farming systems to sequester carbon and to validate the results in different soils, agro-ecological zones and cropping systems.

This work was part of the project Carbon Credits for Sustainable Land Use Systems (CaLas) funded by the Mercator Foundation Switzerland. We also received support from the Food and Agriculture Organization of the United Nations in the context of the Round Table of Organic Agriculture and Climate Change, whose expert meetings also contributed to this study.