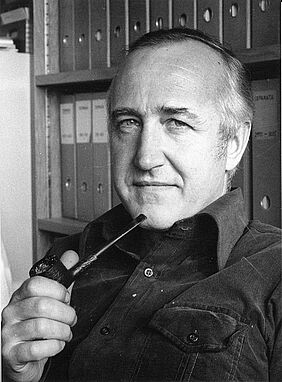 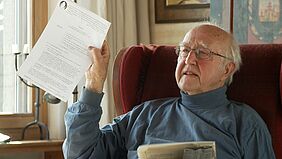 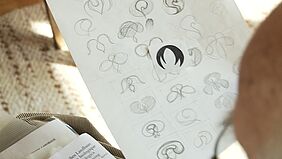 The fair design of the Bud logo: Photo: Giorgio Zehnder 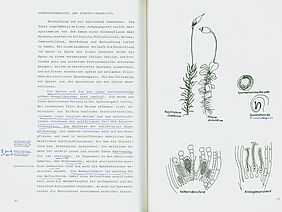 The biology lectures of Phiippe Matile are remembered very well by many students of agronomy at the ETH Zuerich. The author included many illustrations into his lecture notes. 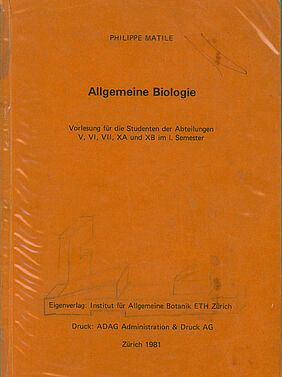 On Saturday October 29, 2011, Philippe Matile died at the age of 79. Philippe Matile was one of seven individuals who founded the Swiss Foundation for the Promotion of Organic Agriculture, the foundation which supports the Research Institute of Organic Agriculture (FiBL). Philippe Matile was instrumental in driving forward the development of FiBL. Thomas Alföldi visited the former professor in spring 2011 in the course of making a film about the history of organic farming. Here is a summary of the interview.

During his postdoctoral period at the Swiss Federal Institute of Technology (ETH), Philippe Matile lived with his family at Hof Breitlen, the biodynamic farm run by Emil and Alice Meier in Hombrechtikon near Zurich. As a plant physiologist, he was astonished that this farm functioned so well without the addition of any mineral-based fertilizers.

In 1966 he worked up his observations on Hof Breitlen into an article which was published under the title "Limits of synthetic fertilizer farming” in the respected daily newspaper DIE TAT (see link below). He questioned the conventional theory of fertilization and concluded with the sentence: "Evidently the soil is not impoverished if the farmer maintains the optimal activity of the invisible life in his soil by making skilled use of organic fertilizers.”

The article prompted a clamorous response and was reprinted by numerous other papers. Colleagues at the ETH were upset, but the outcry brought the young professor to the attention of Heinrich Schalcher, the Evangelical People’s Party of Switzerland (EVP) representative on the Swiss National Council. For some time already, Schalcher had been calling for an independent research institute for organic agriculture. It was impressed upon Matile that his role as an ETH professor required him to show greater moderation in his public comments. Nevertheless, in October 1971, Matile gave a lecture in Bern on the subject of "Environmental protection and agriculture”. A short time afterwards, Heinrich Schalcher incorporated the key points from this lecture into the motion he put to the National Council to create an organic research institute. The reaction from the responsible Federal Council member Ernst Brugger was noncommittal: "One swallow doesn’t quite make a summer, even if the swallow is a famous professor” (as recounted by Kupper 1996).

As Matile recalled, the directors of all the national research institutes lashed out in his direction, with the exception of Director Bovet of the institute at Liebefeld. He was summoned by Federal Councillor Brugger for a frank discussion, which was also attended by the heads of the research institutes and of the Swiss Federal Office for Agriculture (FOAG). At the end of the meeting, Ernst Brugger entrusted Jean-Claude Piot, the director of the FOAG, with the task of negotiating with the representatives of organic agriculture. "We were both pipe-smokers, which did much to break the tension of the uncomfortable situation,” Matile reminisced.

The group around Heinrich Schalcher had meanwhile decided to found a research institute on a private basis. Matile in turn played a key role in searching for a location for what he fondly called the Institütchen (baby institute). He brokered the initial contact with the owners of a holding named Bruderholzhof, located in Oberwil in the canton of Basel-Land.

Together with ETH lecturer Michael Rist, Matile set about persuading the ETH doctoral alumnus Hardy Vogtmann to return to Switzerland from his postdoctoral research in Canada and oversee the development of the newly established Research Institute of Organic Agriculture (FiBL) as its founding director.

Matile was also involved in the planning of the DOK trial, along with Jean-Marc Besson of the Liebefeld research institute, Hardy Vogtmann, and ETH professor Vittorio Delucchi.

It occurred to Matile that the new institute needed a positively recognizable logo for its letterhead. A drawing-teacher friend named Christian Brügger provided him with a whole sheaf of rough designs. Matile picked out one of these sketches, made a fair drawing – and the Bud symbol was born (see picture, right). The Bud initially became the logo of FiBL (1974 to 1993) but from 1982 it was also adopted as the logo of the federation of Swiss organic farming movements (VSBLO), now Bio Suisse. "The Bud is the most notable mark I’ll leave behind, once I’m dead and gone" were his words at the end of our interview.

This appraisal is actually quite astounding, coming from Matile, one of the most important botanists and plant physiologists of his age. He was even nominated for a Nobel prize for his research on "Leaf senescence” at the ETH and the University of Zurich. Published in 1971, that work remains a frequently-cited foundational text to this day. As a university teacher and doctoral supervisor he influenced numerous renowned plant physiologists and molecular biologists.