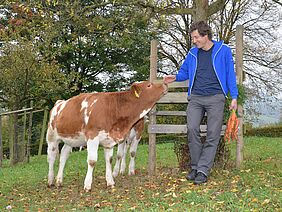 Organic agriculture has many positive effects on the environment and contributes to solving the problem of the world food supply: This is shown in a new FiBL study. One of the authors, Adrian Müller, is shown on a meadow with an organic calf and organic carrots. (Photo: FiBL, Franziska Hämmerli) 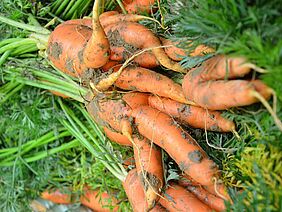 Carrots may sometimes be crooked; however, they should not go to waste. This is a sustainable and saves ressources - now and in the future. (Photo: FiBL, Franziska Hämmerli) 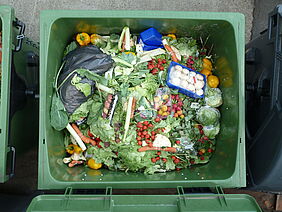 Decreasing food waste is an important cornerstone of sustainable nutrition. This includes eating less animal products and using less concentrated feed such as wheat and soybeans in animal production. This way, 9 billion people could be fed with organic agriculture in an environmentally friendly way according to the new FiBL study. (Photo: Wikimedia Commons)

A worldwide conversion to organic farming can contribute to a comprehensive and sustainable food system, if combined with further measures. Thus, it is important to reduce over-consumption of livestock products, to use less concentrated feed in livestock production and to avoid food waste. Such a food system has positive effects on important environmental aspects by curbing greenhouse gas emissions, reducing over-fertilisation and use of pesticides, and does not lead to a higher land use despite organic management. This was shown in a new study led by the Research Institute of Organic Agriculture FiBL, which has recently been published in the renowned scientific journal "Nature Communications".

(Frick, 14 November 2017) Different scenarios show that the negative impacts of agriculture on the environment will drastically increase by 2050, should the projections of the Food and Agriculture Organization FAO be accurate. Their estimates suggest a population of over 9 billion people and a change in dietary habits, such as increased meat consumption, using more resources such as water, energy and land.

Conversion to organic farming as a solution?

The conversion to organic farming, which practises a more environmentally-friendly use of resources, is thus often suggested as a solution to counteract the negative developments. However, critics emphasize that this conversion would lead to higher land use and thus would not be a feasible alternative.

Several strategies are required to feed the world sustainably

The new study shows that organic farming can play an important role in a sustainable food system, in combination with reduced consumption of animal products, avoiding concentrated livestock feed and reduced food waste. The world’s food security would be ensured even with over 9 billion people in 2050, agricultural land area would not increase, greenhouse gas emissions would be lowered and the negative effects of today’s intensive food systems, such as nitrogen surplus and high pesticide exposure, would be greatly reduced. In contrast, the conversion to organic farming should consumption patterns remain unchanged would lead to increased land use change to agriculture.

Organic farming has major advantages with regard to many central environmental impacts, such as the issues of nitrogen and pesticides. On the other hand, it requires higher land use because the generally more extensive management results in lower yields compared to conventional farming.

The advantages of grassland-based animal production without concentrated feed are that pastures, which cannot be used for arable crops, are used for food production. The disadvantages are increased greenhouse gas emissions per kilogramme of meat and milk.

The advantages of reduced food waste are rather obvious, since such a reduction would directly lead to lower production.

The new study shows how to optimally combine these various strategies to deal with conflicts of goals. Even if 60 % of agriculture would convert to organic farming, concentrated feed were reduced by 50 % and food waste by 50 %, it would result in a food system with significantly decreased environmental impacts, including lower overall greenhouse gas emissions, and only a marginal increase in agricultural land area.

The consumption of animal products would need to decrease by about a third because less feed would be available.

Thus, sustainable agriculture is only possible when consumption patterns are changed – then, the possibilities are promising. Organic farming can play a key role in it.

This study was carried out in collaboration with researchers from the Food and Agriculture Organization of the United Nations FAO, the University of Aberdeen, the Alpen-Adria-Universität Klagenfurt and the ETH Zurich, and has recently been published in the renowned scientific journal "Nature Communications".

Link to the study

youtube.com: Video summarizing the results of the study