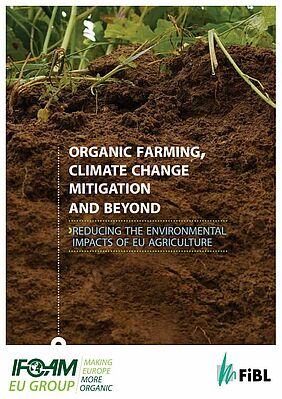 Besides a general overview on the performance and the potential of organic agriculture in relation to these topics, the report in particular addresses the situation in the European Union (EU) and the potential of organic agriculture to contribute to achieving the EU climate change mitigation goals.
Organic agriculture has a big mitigation potential in soil carbon sequestration (building up humus), in reduced nitrogen application levels and the avoidance of mineral nitrogen fertilizers. Currently (2015), about 6 % of agricultural areas in the EU are under organic management. A gradual increase to 50 % by 2030 could reduce (lower nitrogen levels; no mineral fertilizers) or compensate (soil carbon sequestration) emissions by 10 to 15 % of total agricultural emissions of the EU. In 2030, this mitigation potential would reach about 30 %.