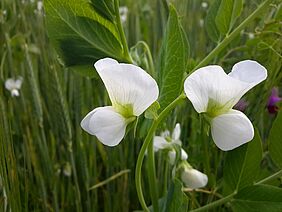 Protein peas are easy to process and are suitable for a variety of purposes. (Photo: FiBL, Matthias Klaiss)

Over ten years ago, only about 80 hectares of organic peas and fava beans were cultivated in Switzerland. This accounted for only three percent of the Swiss demand for organic feed. The risk for farmers was high and the prices were rather low compared to wheat. Therefore, large quantities of organic feed were imported, especially organic soy from China. Bio Suisse, the Association of the Swiss Organic Agriculture Organisations, increasingly had a credibility problem because of these imports. In this video, FiBL advisor Hansueli Dierauer explains how this problem was solved. This video was produced in the framework of the EU project DiverIMPACTS, which promotes the diversification of cropping systems.