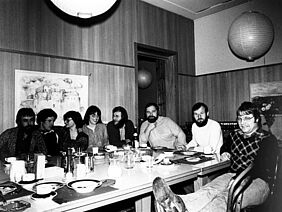 FiBL in the 1970s: the FiBL scientists and director Hardy Vogtmann in Oberwil. Photo: FiBL 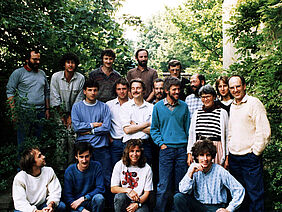 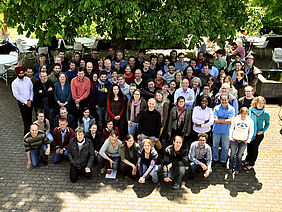 This year marks the 40th anniversary of FiBL, the Research Institute of Organic Agriculture. In fact, the institute’s history goes back even longer, to 1966, when Philippe Matile, professor of plant physiology at the Swiss Federal Institute of Technology (ETH) in Zurich, wrote in the daily newspaper Die Tat: “Artificial fertilisation is a dead end.’ He called for a return to humus management, as practised by organic farmers.

Professor Matile followed up by contacting National Councillor Heinrich Schalcher, who then brought a motion to the Swiss Federal Parliament. Schalcher urged that the Swiss government should devote one of the federal agricultural research stations, which numbered seven at the time, entirely to organic farming. The government failed to recognise the need. The two visionaries, however, continued their struggle. The organic farmers in Switzerland, then numbering only a few hundred, were electrified by the prospect of being heard at long last and debating their concerns with scientists willing to depart from the mainstream. When FiBL was founded in 1973 in the form of a private foundation, close cooperation with organic farmers was already a part of its system.

Browsing through FiBL’s archives reveals fascinating insights into the full development of modern organic farming in Switzerland and throughout the world. The first standards adopted by the Swiss federation of organic organisations (Vereinigung schweizerischer biologischer Landbau-Organisationen, VSBLO) – now Bio Suisse – covered just four pages of paper; the first standards of the International Federation of Organic Agriculture Movements (IFOAM) only needed two. The Bud emblem emerged from the FiBL logo to become the mark of certified organic agriculture, and is now a successful marketing instrument of Bio Suisse, a confident and strong institution. Organic inspections were initially carried out by external consultants. This has transformed into a modern inspection system in line with ISO standards. FiBL staff have been instrumental in the development of IFOAM’s international organic standards, the United Nations organisations’ Codex Alimentarius, and the European Union’s regulations. Important recent milestones of FiBL’s history have included the founding of FiBL Germany and FiBL Austria in the early 2000s.

Large challenges remain. For one thing, it is vital to make conversion to organic management more attractive. This calls for a whole array of technical improvements to production methods, which in turn needs research. A key overarching concern is to make organic farming a lighthouse for ecological, social and economic sustainability.

FiBL staff have contributed 35 ideas to this year’s innovation competition, an annual internal event. The winning idea – stress-free, species-appropriate and ethically acceptable livestock slaughtering – will now be tackled without delay.
Organic farming is evolving continuously, and markets are becoming ever more differentiated. Novel challenges include fibre crop production and aquaculture. Organic convenience products are gaining ground, placing major demands upon food processing technology. Moreover, the poverty and food insecurity prevailing in many parts of the world are a prime concern of the international community and a serious challenge to farmers, extension workers and scientists. Organic farming remains vibrant and challenging – 40 years on.