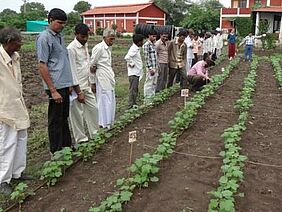 Farmers evaluating crops during a field day at the research farm of bioRe. Photos: FiBL 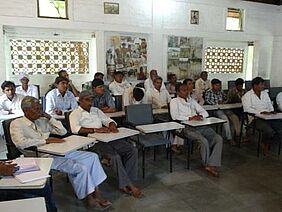 Farmers during a training event at bioRe. 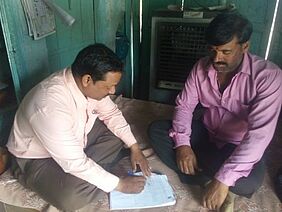 Interview with a farmer.

FiBL scientists have released a report identifying "Major bottlenecks of cotton production in Nimar valley of central India". The report is based on a recent farm survey conducted by Amritbir Riar and Gurbir Bhullar in collaboration with bioRe association in the Madhya Pradesh state of India. It presents a diagnosis of biophysical and socio-economic factors limiting the productivity of organic cotton. The study is funded by the Coop Sustainabilty Fund.

India has been an important exporter of cotton since ancient times. In the year 2014-15, India became the largest producer of cotton in the world as Indian farmers produced 6.51 million tonnes of cotton fibre. India is also the largest producer of organic cotton, as it contributes about three quarters (74 percent) to the global organic cotton production. With a steeply increasing demand for organic fibre, it is important to safeguard and increase the production of organic cotton in a sustainable manner – even more so as cultivation of genetically modified cotton is spreading fast. Advantages and disadvantages of organic and conventional agriculture, with or without the inclusion of genetically modified (GM) materials, remain under heated controversy. Numerous reports from developing countries about the hardships of smallholder farmers emphasise the urgent need to understand the challenges faced by them.

Nimar valley of Madhya Pradesh in central India is an agriculturally important region, where cotton is cultivated as a major cash crop, in rotation with other crops such as cereals and legumes. In general, cotton yields are low and variable in Nimar valley and often do not reach the attainable levels on several farms of the region. To increase the productivity of cotton in the region, appropriate implementation of research and development efforts is needed. For which, precise understanding of the major bottlenecks is of high importance. Development and implementation of the locally adapted interventions targeted at critically important challenges could contribute to the long-term sustainability of organic cotton production in the region.

The study found a large variation among the cotton yields achieved by different farms, both under organic and conventional management. This highlights the tremendous scope of improvement of cotton productivity in the region. A significant increase in overall production could be achieved, if the underperforming farmers are supported to increase their production, even to the average levels by training them in the appropriate implementation of existing technologies e.g. maintaining required plant population, suitable choice of cultivar considering their soil type, adequate irrigation and nutrient application.

In order to safeguard the integrity and sustainability of organic cotton in Nimar valley of India, it is important to close the knowledge gap among producers by strengthening the extension services of bioRe. Continuous training of extension workers and farmers in sustainable farming practices is of greatest importance to enhance productivity and product quality – while making farmers aware of the impact potential of already existing and available technologies, but which they don’t use or don’t use appropriately.