Urs Niggli has been the director of FiBL Switzerland since 1990, and on April 1 he will pass the position over to Knut Schmidtke, Lucius Tamm and Marc Schärer.

During Urs Niggli's time as director, FiBL has developed into a renowned authority on organic farming and has grown from 20 to 280 employees at offices in Switzerland, Germany, Austria, France and Brussels. Urs Niggli’s many contributions ensured that FiBL is highly regarded and linked to many networks at the European and international level.

One of Urs Niggli's major achievements is having FiBL's work scientifically recognized. In an interview with the magazine Ökologie & Landbau, he says: "When I started, FiBL had a reputation for conducting research that was favourable to organic farming; that the results would not stand up to objective verification; that FiBL’s only goal was to prove that organic is good, and any criticism was hidden. As a scientist, I could not accept this, of course. So I adapted the organisational structure by creating departments in order to build up strong competences in key disciplines. In 2002, the efforts proved successful for the first time, when we were able to publish the results of our DOK trial in "Science". This launched us into the scientific elite."

In 2014, FiBL’s scientific qualifications were confirmed by a renowned authority: a team of prestigious European scientists examined the institute in a peer review commissioned by the Swiss Federal Office for Agriculture (FOAG).

In addition to improving the scientific image, Urs Niggli has always considered the connection to agriculture and practitioners very important. As a result, transdisciplinary and participatory research is of great importance at FiBL Switzerland, as is the rapid transfer of new findings into practice through the internet platform bioaktuell.ch, publications, courses and personal advisory services.

The FiBL team and the Board of Trustees sincerely thank Urs Niggli for his tireless commitment to FiBL and for further developing organic farming! He will continue to be involved in strategic issues for organic research in the future as President of the Boards of FiBL Europe, FiBL Germany and FiBL Austria.

The symposium to bid farewell to Urs Niggli unfortunately had to be postponed due to the corona outbreak. It will be rescheduled as soon as possible. To mark Urs Niggli's farewell as director, a number of articles were published, a selection of which is compiled below.

Links and donwloads (in German) 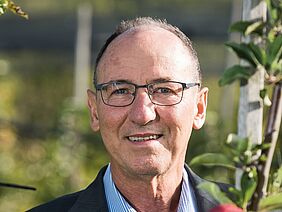 Following his departure, Urs Niggli will continue his commitment to organic research at FiBL Germany, FiBL Austria and FiBL Europe, and will also contribute his know-how to the council of Agroscope. (Photo: Samuel Schalch) 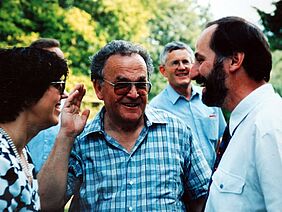 In 1994 the federal council visited FiBL in Oberwil on its annual trip. From left to right: Federal president Otto Stich, federal councillor Kaspar Villiger and Urs Niggli. Otto Stich became president of the FiBL foundation council after his term as federal councilor (1996-2007). (Photo: made available) 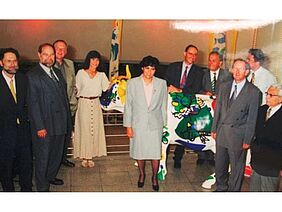 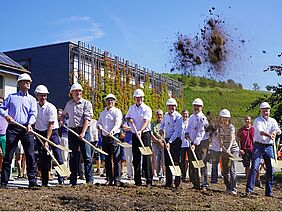 At the ground-breaking ceremony for the new research and education campus in 2018 (Urs Niggli, 6th from the left). (Photo: FiBL, Thomas Alföldi) 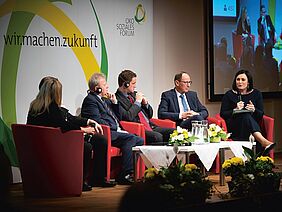 Opening of the winter conference 2020 of the EcoSocial forum in Vienna: EU agriculture commissioner Janusz Wojciechowski, Jannes Maes, president of the European Council of Young Farmers, Urs Niggli and Elisabeth Köstinger, Austrian minister of agriculture (from left to right). (Photo: made available)