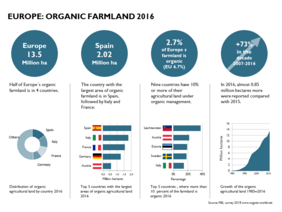 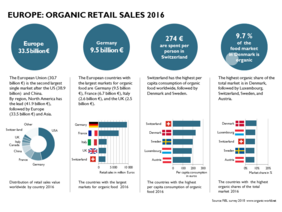 Switzerland has the highest per capita consumtion of organic food in Europe and worldwide.

The organic market in Europe continues to grow. In 2016, it increased by 11.4 % and nearly reached 33.5 billion euros. Almost all of the major markets enjoyed double-digit growth rates. At BIOFACH, the world’s leading trade fair for organic food, the Research Institute of Organic Agriculture FiBL and the Agricultural Market Information Company AMI are presenting the 2016 data of the European organic sector (February 14, 2018 from 5 to 5:45 pm at BIOFACH in Nuremberg, Room Kiew).

The organic land increased by almost one million hectares, representing an increase of 6.7 percent in Europe and 8.2 percent in the European Union. Growth was higher than in 2015 and substantially higher than in the first years of the current decade. In 2016, Italy reported over 300’000 hectares more than in 2015, and France reported over 200’000 hectares more.

Organic farmland in Europe constitutes 2.7 percent of the total agricultural land and 6.7 percent in the European Union. In Europe (and globally), Liechtenstein has the highest organic share of all farmland (37.7 percent) followed by Austria, the country in the European Union with the highest organic share of agricultural land (21.9 percent). Nine European countries reported that at least 10 percent of their farmland is organic.

Strong growth of processors and importers

The European market recorded a growth rate of 11 percent (European Union: 12 percent), which is the second time retail sales have had a double-digit growth rate since the financial crisis. Among the key markets, the highest growth was observed in France (22 percent). In the decade 2007-2016, the value of European and European Union markets has more than doubled.

Globally, European countries account for the highest shares of organic food sales as a percentage of their respective food markets. Denmark has the highest organic share (9.7 percent) worldwide. Individual products and product groups hold even higher shares. Organic eggs, for instance, constitute more than 20 percent of the value of all eggs sold in several countries.

The yearbook "The World of Organic Agriculture" can be obtained at BIOFACH at the FiBL stand in Hall 1 (stand 553). The book includes a detailed chapter about organic in Europe, with many tables and graphs.

Data can be explored through online interactive infographics available on IFOAM EU’s website or by visiting IFOAM EU at BIOFACH Hall 1, stand 451.

The BIOFACH session on the European organic market takes place on February 14, 2018, from 5 to 5:45 pm in room Kiew, NCC East, Nürnberg Exhibition Centre. (For programme see below).

biofach.fibl.org: More information on the programme