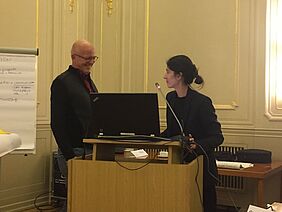 FertilCrop – Fertility Building Management Measures in Organic Cropping Systems – and TILMAN-ORG – Reduced tillage and green manures for sustainable organic cropping systems – were chosen out of 33 projects. The award was given at the recent CORE Organic 15th Anniversary event, which took place on December 10 in Bonn, Germany.
Andreas Fliessbach, who coordinated FertilCrop, and Paul Mäder, who coordinated TILMAN-ORG, both received the award, which was selected based on five criteria:

"It was a team effort, and everyone in the consortium worked very well together," said Andreas Fliessbach when receiving the award. He also gave particular thanks to Helga Willer from FiBL, who did an excellent job coordinating the communication and dissemination part of both projects.

Both coordinators were given registration and travel fees for the Organic World Congress, which will be held in September 2020 in Rennes, France.

The overall goal of FertilCrop, which ran from 2015 to 2017 as part of CORE Organic Plus, was to develop efficient and sustainable management techniques, which aim to increase crop productivity in organic farming systems. TILMAN-ORG, which ran from 2011-2014 as part of CORE Organic II, focused on designing improved organic cropping systems with: enhanced productivity and nutrient use efficiency, more efficient weed management and increased biodiversity, but lower carbon footprints. Both projects produced a lot of information on crop productivity and cropping systems, such as a video tutorial for spade test and several technical notes.

CORE Organic is the acronym for "Coordination of European Transnational Research in Organic Food and Farming Systems". It is a network of European ministries and research councils funding research in organic food systems at national levels. The main focus is to join forces and fund transnational research projects covering the most important challenges along the organic value chains. The network also receives funding from the European Union’s Horizon 2020 programme. The current CORE Organic Cofund network is the continuation of the CORE Organic I, CORE Organic II and CORE Organic Plus networks.