Nitrous oxide emissions from extensive nitrogen fertilisation practices, methane emissions from cattle husbandry: Intensive agriculture is responsible for large amounts of greenhouse gases (GHG) and contributes contributes 10 to 15 percent of the total global greenhouse gas emissions (measured in CO2 eq). However, agriculture and in particular organic agriculture can also be part of the solution. Carbon dioxide, for example, is reduced through the avoidance of synthetic fertilisers. Humus management is a core principle in organic agriculture and enables CO2 sequestration in soil.

The scientific substantiation of these aspects is a major goal of the CaLas project (Carbon Credits for Sustainable Landuse Systems).

Briefly, the CaLas project aims at quantifying the potential of

in order to enable the participation in the trade in carbon credits from sustainable landuse systems.

For this purpose, in a first step a comprehensive literature review followed by meta-analyses is conducted to evaluate organic agriculture in terms of its climate relevance.

Based on this, in a second step an internationally recognised methodology will be developed which enables the quantification of the climate services of organic agriculture for carbon credit trading.

The methodology will be based on a sound scientific unterstanding of greenhouse gas emissions and carbon sequestration. Later on, the developed methodology will be programmed to an easy-to-use software open to the public. Finally, the methodology developed will be subjected to an accreditation process. This is done within a pilot project in a developing country, according to the international standards of the Kyoto Protocol, for which the framework conditions are checked and the possible carbon credit units are calculated in advance.

A significant innovation of CaLas is that the conversion to organic agriculture in developing countries will be supported by the possibility of additional revenues from carbon credits and various co-benefits for the farmers are generated as a consequence of this. These co-benefits include additional positive environmental impacts (soil fertility, biodiversity, resource conservation), contribution to food security (yield increase and yield security) and a new income opportunity for smallholders (empowerment, food security).

The Intergovernmental Panel on Climate Change (IPCC) concludes in its latest report that agriculture rarely explores its potential for soil carbon sequestration. FiBL scientists with the support of Mercator Foundation Switzerland rise to the challenge to change this by demonstrating how sustainable landuse practices can mitigate GHG emissions. 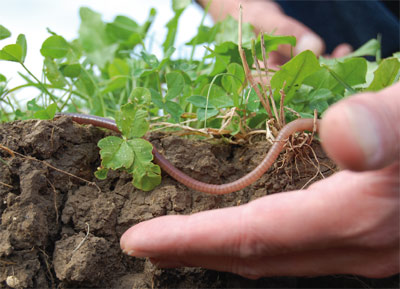 Video on the final CaLas Conference at FiBL in Frick, December 2011